Ladakh, a newly announced Union Territory formed after the revocation of Article 370, is a remote yet important part of India. The region holds a significant position because of its location near the border. Apart from being visited by thousands of tourists who get enthralled with the scintillating beauty of Ladakh, it is also an important army base of our country. 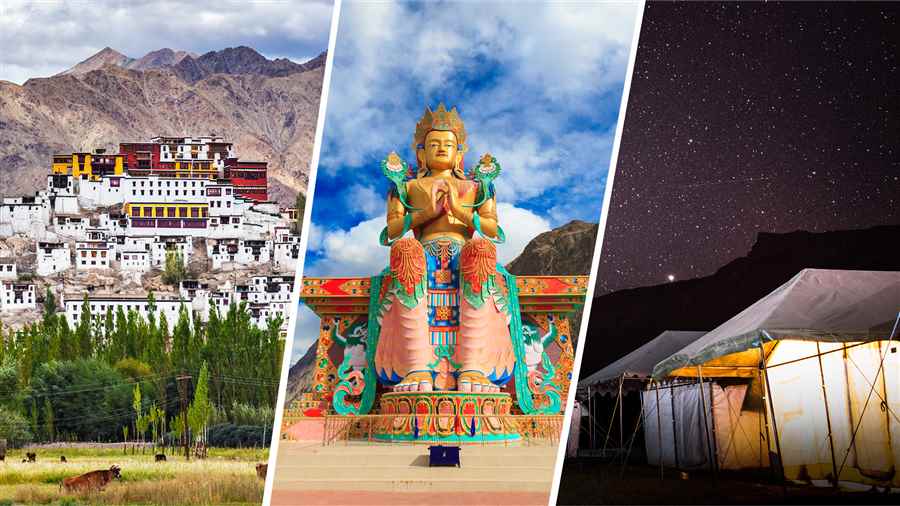 Formed under the provisions contained in the Jammu and Kashmir Reorganisation Bill, Ladakh is administered as a union territory without a legislative assembly. Lieutenant Governor appointed by the President of India administers the region with the assistance of officials. The two Union Territories were created after the bifurcation of the state of Jammu and Kashmir on August 5. Radha Krishna Mathur took oath as the first Lieutenant-Governor of Ladakh. This newly formed Union territory comes under the jurisdiction of the Jammu and Kashmir High Court.
Union Territory of Ladakh
Hon'ble Lieutenant Governor
Address:Raj Bhawan, Leh-Ladakh
Phone:01982257440
https://ladakh.nic.in/

The exquisite landscape of Ladakh, known as largest Cold Desert in world, is uncanny in its prehistoric era. The only known evidences of Ladakhi history reveals its existence as independent state for 900 years beginning from 10th century. Read More

Right from its Picture-perfect gompas (Tibetan Buddhist monasteries) to rugged terrain, snow-capped peaks, everything is magnetic about the place. Its sheer mountain beauty and exciting adventure sports facilities make it a must-visit destination of India. The region is called the adventure capital of India because it has a lot to offer to adventure freaks who want to explore adventure in Ladakh. The city gives adventure enthusiasts an unparallel opportunity to get indulged in adventurous activities like Trekking, Cycling, White Water Rafting, Mountaineering, Polo, Archery, Jeep & Yak safari, etc. Read More

Various dynasties ruled over the valley and left behind their own cultural heritage to be followed as such. Religious entities were also largely affected with these invasions. Hence, the region has a varied culture marked by its folk arts and enchanting handicrafts. 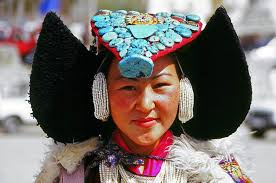 Ladakh region near Jammu and Kashmir is known for its strong association with Indo-Tibetan culture. It has strong influence of Buddhism which is an integral part of its dance, music, and languages. In the districts of Leh and Zanskar, population is predominantly Tibetan Buddhist while Kargil district is largely inhabited by Shia Muslims.

Sunni Muslims are mostly found in some areas of Leh, mostly in Balti villages. In Ladakh, there are also some small groups of Christians who got converted during 19th century under British influence.

There are Changpa people who are nomads of Rupshu plateau and descendent of Dards in Dras area. Ladakh region also has many Lamas living here. These are believed to be the Oracles, the connection between spiritual and physical world. Monk Oracles from Matho Gompa are the most popular ones across the region.

In Ladakh, Gonchas are worn by men and Tsulmas by women. These are accompanied with lots of sparkling ornaments. Peraks of Turquoise are most common item of jewelry for Ladakhi women. People in this region also wear embroidered waistcoats, boots, and hats with their velvet gonchas.
However, with changing lifestyle, other ethnic ensembles from India like sarees, salwar kameez, and churidaar suits are also making their headway into costumes of J&K.

Ladakh is known for its pristine beauty and rich cultural heritage. The colorful city becomes all the more vibrant during the festive season. Various festivals in this part of India reflects different aspects of its heritage and culture. These festivals of Ladakh attracts people all over the world. Ladakh Festival, Losar Festival, Hemis Festival, Phyang Festival, Tak Tok Festival are some of the important festivals celebrated in this part of India. Read More

Leh Ladakh is a well-known destination among adventure enthusiast. If you are looking for an adventurous expedition then Ladakh is the ideal place for you. With all its charm and beauty Ladakh attracts travelers from all over the world. The hilly region offers several avenues to adventure tourists to enjoy their vacation at fullest. Plan your trip to this hilly region to enjoy mountaineering, trekking, river rafting, paragliding and more. Read More

The newly formed union territory of Ladakh enjoys presnce of basic utility services. From hospitals to banks and post offices you can find all and more in this part of India. Known for its snowcapped mountains and beautiful valleys, Ladakh offers better lifestyle to its residents. Here you can find all essential public utilities and emergency services to make living and staying easier for everyone. Let us explore the services in public utilities domain and preparedness of state to tackle any emergency situation as such.

Find the contact details of the reliable hospitals in Leh below:

In Ladakh, there is not very deep penetration of medical institutes due to its sparse population. But the region has two blood banks in the government hospitals established in these two main districts of this region. They are well equipped to store blood and its components for requirement of blood transfusion that may arise in any part of Ladakh.

Leh Ladakh is difficult place to arrive in the region of Jammu & Kashmir. There are two different ways to reach this location. First is via national highway 1 from Srinagar and other by Shimla Manali route. Leh is 434 km from Srinagar while 473 km from Manali. Traveling to Leh from these locations takes nearly 18 hours to 24 hours. The approximate fare offered from both locations is Rs. 560 onwards. Buses to Leh are also available from the town of Keylong in Himachal Pradesh.